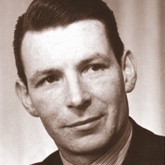 Dick Farrelly born Richard Farrelly (17 February 1916 – 11 August 1990) was an Irish songwriter, policeman and poet, composer of “The Isle of Innisfree”, the song for which he is best remembered. His parents were publicans and when Farrelly was twenty-three he left Kells, County Meath for Dublin to join the Irish Police Force. He served in various Garda stations throughout his thirty-eight-year career, ending up in the Carriage Office in Dublin Castle. At heart Farrelly was very much a songwriter and poet. He was a private, modest and shy man who wrote over two hundred songs and poems during his lifetime. He married Anne Lowry from Headford, Co.Galway in 1955 and the couple had five children. His two sons Dick and Gerard are professional musicians.

Find out more about Richard Farrelly