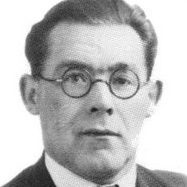 Idris Davies (6 January 1905 – 6 April 1953) was a Welsh poet. Born in Rhymney, near Merthyr Tydfil in South Wales, he became a poet, originally writing in Welsh, but later writing exclusively in English.

He was the only poet to cover significant events of the early 20th century in the South Wales Valleys and the South Wales Coalfield, and from a perspective literally at the coalface. He is now best known for the verses “Bells of Rhymney”, from his 1938 Gwalia Deserta (meaning literally “Wasteland of Wales”), which were later adapted into a popular folk song.

Find out more about Idris Davies