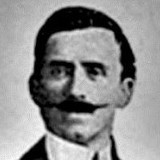 Graff was born in New York City. He wrote the lyrics to “When Irish Eyes Are Smiling” along with Chauncey Olcott for Olcott’s production of The Isle O’ Dreams in 1912.

He collaborated on many other songs with either Arthur Fields or Ernest Ball, and was a charter member of ASCAP.

George Graff died in Stroudsburg, Pennsylvania in 1973, at the age of 86.