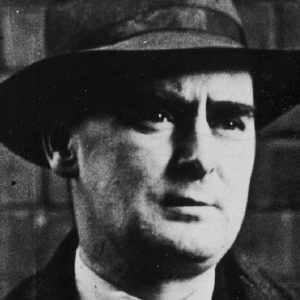 Brian O’Nolan (Irish: Brian Ó Nualláin; 5 October 1911 – 1 April 1966), better known by his pen name Flann O’Brien, was an Irish novelist, playwright and satirist, considered a major figure in twentieth century Irish literature. Born in Strabane, County Tyrone, he is regarded as a key figure in modernist and postmodern literature. His English language novels, such as At Swim-Two-Birds and The Third Policeman, were written under the O’Brien pen name. His many satirical columns in The Irish Times and an Irish language novel An Béal Bocht were written under the name Myles na gCopaleen.

O’Brien’s novels have attracted a wide following for their bizarre humour and modernist metafiction. As a novelist, O’Brien was influenced by James Joyce. He was nonetheless sceptical of the cult of Joyce, which overshadows much of Irish writing, saying “I declare to God if I hear that name Joyce one more time I will surely froth at the gob.

Find out more about Flann O’Brien