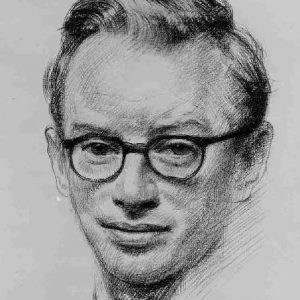 MacDonagh was born in Dublin on St Cecilia’s Day in 1912. He was still a young child when his father Thomas MacDonagh, an Irish nationalist and poet, was executed in 1916. Tragedy struck again when his mother, Muriel Gifford, died of a heart attack a year afterwards while swimming at Skerries to Lambay, County Dublin on 9 July 1917.

He was a noted poet, playwright, folklorist, radio presenter. In between times he was a district justice.

In 1934 he and Niall Sheridan self published Twenty Poems with each contributing ten poems. He published three volumes of poetry: “Veterans and Other Poems” (1941), The Hungry Grass (1947) and A Warning to Conquerors (1968). He also edited the Oxford Book of Irish Verse (1958) with Lennox Robinson.

Find out more about Donagh MacDonagh