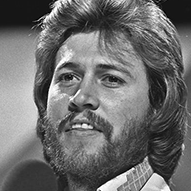 Sir Barry Alan Crompton Gibb CBE (born 1 September 1946) is a British-American musician, singer-songwriter and record producer who rose to worldwide fame as a co-founder of the group the Bee Gees, one of the most commercially successful groups in the history of popular music. With his younger brothers, twins Robin and Maurice Gibb, he formed a songwriting partnership beginning in 1955. He has lived in Britain, Australia, and the United States, holding dual UK–US citizenship.

Find out more about Barry Gibb